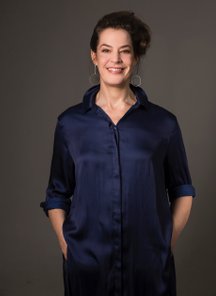 Karolina was born and raised in Stockholm and has worked professionally as operasinger since 2007, when she graduated from the Stockholm Opera Academy. She has sung on operastages and concert halls all around Sweden, as well as the rest of Europe and has made herself a name for being an artist with a wide artistic range.

Karolina had her big break through in 2007 with the lead role Xerxes in the opera by Händel as she sung her debut at the Drottningholm theatre. Since then her career has consisted of roles such as Orfeo (Gluck), Pauline (Queen of Spades), Ottone (L´incorronazione di Poppea), Prins Orlofsky (Die Fledermaus), Fenena (Nabucco), Xerxes (Händel), Cornelia (Cesare), Giovanni Battista (Salome, Stradella), Maddalena (Rigoletto). She has also done cross-over roles such as the baritone role Guglielmo in the opera Le Villi by Puccini, which was sung one octave above original.

In the summer of 2010 Karolina was engaged for the opera festival d´Aix en Provence in the role Phèdre in Hippolyte et Aricie (Rameau). The production, named Pygmalion, was a collaboration between Les Arts Florissants and Sir William Christie together with the legendary choreographer Trisha Brown and the Trisha Brown Dance Company. Karolinas performance was noticed both in the press and among the festival audience. Pygmalion toured to Amsterdam och Athens

Collaborations with dancers, choreographers and dance companies have continued to be a part of Karolinas career. Apart from Trisha Brown she has  worked with the Irish Animated State Dance Company, Apostolia Papadamaki (Greece), Lotta Melin (Sweden), Patrik Sörling (Sweden) and Cisco Aznar (Spain)

In 2008 she was invited to represent Sweden and entertain at the big banquet at state visit of the Royal Court to Lisbon, Portugal. She has also been engaged for the Baltic Sea Festival as well as the Swedish Television Fortnight concert at Berwaldhallen, Stockholm. Karolina has also sung a great deal of contemporary compositions by for e.g. Jonas Forsell, Paula af Malmborg Ward and Thomas Hewitt Jones and was the first soloist to sing the mezzo soprano part in Rekviem by Jan Sandström

Alongside her traditional work with the classical repertoire, Karolina has always kept an aspiration for examining and developing the way of performing classical music. She has always had a great scenic interest and has made sure to have a number of her own concerts per year, where she can apply her own conceptual ideas.

In 2013 she had the first opening of a performance of her own called  "Opera für Alle!" which was given at the Stockholm City Theatre. The performance turned out to be a huge success and was later given during the summer at the Confidencen - the famous small  baroque theatre in Stockholm - as well as at the Helsingborgs Stadsteater.

In collaboration with Riksteatern - the Swedish National Theatre organization - the performance made a successful Sweden tour of 27 performances during the autumn of 2015.

The season 2016/2017 Karolina was working with the famous new circus company CIRKUS CIRKÖR in the Philipe Glass´opera SATYAGRAHA at Folkoperan in Stockholm.

The performance is now returning during spring of 2018 with performances in Stockholm as well as the Copenhagen Opera Festival and at Brooklyn Academy of Music in New York.

This fall she sings the role of Mrs. Peachum in Kurt Weill and Bertolt Brecht´s "The beggars opera" at the Stockholm Folkopera.

Apart from her musical education Karolina has a degree from the Gotland School of Fine Arts as well as a basic degree in Social Science. She also plays the alto saxophone, is a skilled sketcher and painter and a creator of stage costumes and puppets, as well as music productions. Click on the BLIXTART page to see and hear.